My wife recently surprised me with a copy of the TAS favorite Everest 3004, Goosens’ LSO Roman Festivals. I’d been looking for a copy for years, as they seldom come available on eBay or otherwise in decent condition and in first pressings. I first got to know the piece 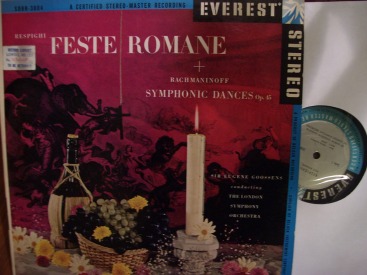 on its CD issue back when I was a part time clerk at Tower Records, and indeed the transfer is superb. The performance is astounding, and the sonics on vinyl are among the best I’ve ever heard – surpassing many of the TAS Mercury and Telarc and Living Stereo issues. The dynamic range is unsurpassed, and silences are pin-drop silent, as in the plucking of the October Festival sequence.

By way of comparison, TAS also favors the 1975 Maazel/Cleveland record, which I have on a famed MFSL issue, also available on CD transfer. On vinyl the Mobile Fidelity sound is crystalline but, compared to Everest in 1958, rather clinical. There is less sense of space, and a quasi-digital precision detracts from the ambience. Maazel’s is a rip-roaring

account, no doubt, but doesn’t have the reach-out-and-touchability of the Everest. I have an 8-track cartridge of the work, which I almost prefer to the MFSL as it provides more room for the rambunctious sonics. Undertones and reverb are almost eliminated on the MFSL, in comparison to the Everest – and these are vital factors in Respighi. The MFSL record sounds like an IMAX soundtrack; Goosens in the original 1958 sound live.

Partially this may be due to the pressings. The Everest is generously spaced over two sides on much heavier vinyl. Of the two LP set, the remaining are taken up with Rachmaninov’s Symphonic Dances. (Later issues of the Everest condensed the space and eliminated the Rach.) The Maazel London/MFSL is on one side, the other being the Pines of Rome. Everest as a label started out luxuriously with pressings like this, and then quickly faded. The two other first generation Everests I have in my collection, Stokowski’s Don Juan/Till Eulenspiegel and Prokofiev’s Cinderella, are also testament to this commitment to quality. Both Everest and Mercury used 35mm tape, but to my ears Mercury came off sounding more crowded. I wonder how much of this had to do with Mercury using multi-channel recording; SACDs with third channels have since been issued replicating the original sound, and I had a system that allowed for that but found it was ultimately inferior to original two-channel.

Regarding the pairing of Goosens’ Feste, the Rach. Dances, I recently picked up another TAS favorite, the Vox/Dallas Symphony record (34145) and then promptly sold it off. The

sound on this record was great, but the performance completely lackluster. It does not compare, by any standard, either with Goosens or with more modern editions such as Ashkenazy and the Concertgebouw. (On vinyl or CD.)

The Vox/Rachmaninoff Dances LP made me consider the TAS list in general, and to recall a quotation from Barenboim about preferring “Furtwängler with his scratches to Karajan with his lasers.” I disagree with the specifics, as Furtwängler with his erratic tempi gives me carsickness, and I generally favor Karajan, but the point remains: super sonics are not a reason to favor a record. If Telarc had been on hand to record me tootling on my clarinet in high school band as we struggled through the Holst Suites, the sound might have been amazing but I wouldn’t have wanted anyone other than parents to have to suffer through it and list it alongside Frederick Fennell.

Jonathan Riehl writes and teaches communications, rhetoric, and American politics. He used to be a Republican. END_OF_DOCUMENT_TOKEN_TO_BE_REPLACED
This entry was posted on Sunday, January 31st, 2016 at 4:55 pm and tagged with Everest, Feste Romane, goosens, Maazel, Symphonic Dances and posted in Music Criticism. You can follow any responses to this entry through the RSS 2.0 feed.
« Ravel’s Piano Concertos
Harriet Riehl: A Musical Memorial »