I’m not a dedicated fan of 20th Century music in general, but enjoy many of the French and German works that came out of the pre-war and interwar years, including Les Six. I was introduced to Honegger’s 2nd and 3rd via Karajan’s standard setting 1973 recordings with the Berlin Philharmonic, finding them eery, melancholy, and spooky– sounding very much like soundtracks to contemporary horror films. I remember loaning the CD of this classic disc to a friend in high school and her telling me that whilst listening to it late at night her main reaction was that there were “strange sounds coming from my stereo.” 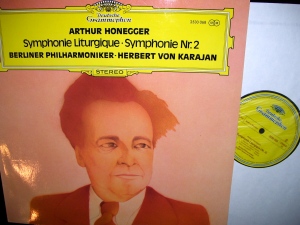 HvK’s approach is intense and integrated, as always. The strange sounds are controlled and frightening. Making them beautiful in the way he felt all music could be…. The sound on my first pressing virgin vinyl (2530-068) is superb, rippling and flowing, with a cool, appropriately echoed acoustic. I didn’t think there was much else to it. I still love this record. The Gramophone thought very highly of it at the time, comparing it only Ansermet’s OSR record, which was relatively unimpressive to my ears — as I usually feel about him — heresy thought that may be.

They might have compared it to Serge Baudo’s 1962 Czech Philharmonic Supraphon record of the same two Symphonies (50027). Their original review, gives short shrift to the music in general and in comparison with the Karajan review of 10 years later, shows how mainstream record critics had come to consider music of this period.

This is one to give to the Karajan critics who don’t like the DGG production of the time, and I’m surprised the Gramophone editors didn’t seize on this in ’73. Had I been at the table, I would have conceded fully. Compared to the bold, immediate Supraphon sound, DGG is smoothed-out, not raw enough to convey the point of the music’s impact. The degree of depth between the two

versions in sonics, let alone visceral emotion, is tangible. Karajan is Hollywood; Baudo is anything but — he’s all angst and emotion, especially in the 3rd.

I cannot vouch for the CD version comparisons, but on vinyl the difference is night and day. Two very different, and differently engaging, readings of some great modern music.