Beethoven’s Kreutzer and a Little Something Extra

And now for something entirely un-esoteric, and which I don’t have the library or expertise to offer a comprehensive discourse upon — Beethoven’s Kreutzer Sonata. (For those purposes, consult Norman Lebrecht’s somewhat more extensive but occasionally very differently inclined Slipped Disc Kerutzer.) Both he and I do agree on the bottom line, and that is at least among modern interpretations, no one matches Perlman and Ashkenazy on London/Decca. 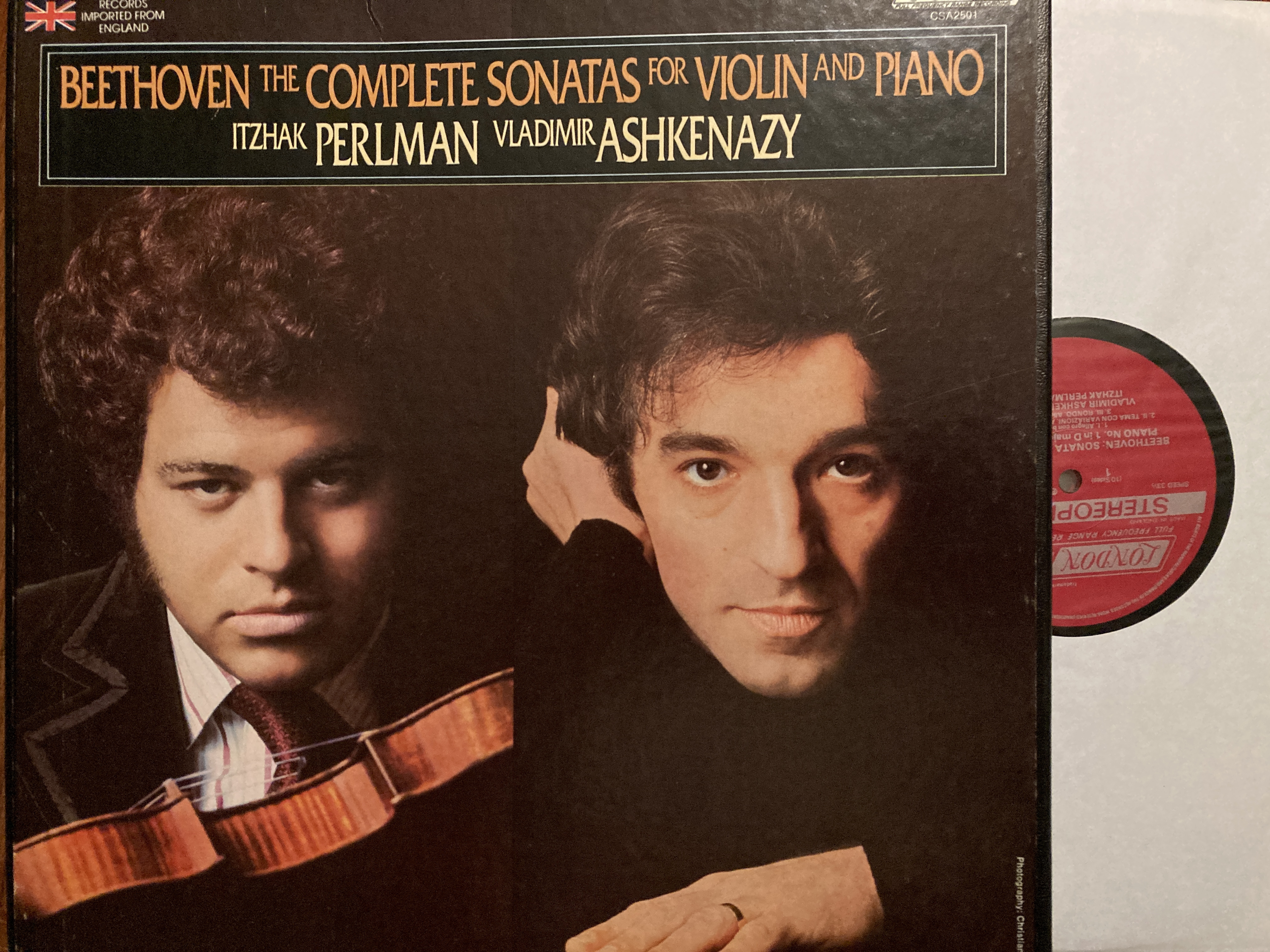 The sound is front-row center and the performance bristles with energy and vigor throughout, and is subtle and even beautiful at moments of respite (not only in the slow movement); but in total this captures the work as a statement of passion, not a model of composition. What I find unnerving about so many versions of this work that, by Lebrecht’s count, has been recorded more than 100 times, is that too many soloist treat it as just another in the cycle, which to be sure is full of other inspired works and moments of Beethovenian inspiration — but this one stands alone just as the Fifth Symphony is of a different order than the other eight.

For me, urgency and tempo are a simple and basic part of this, for both the violin and accompanist. Maybe I’m influenced here by a teacher of mine who, in hindsight, put me through a somewhat ridiculously old-school method of measuring my abilities at “musical memory” not as in sight reading or playing by ear, but in terms of recall ability and score memorization: He had the group of us quizzed methodically on our ability to identify a 30 second segment, at random of course, of any of the Haydn symphonies (ALL, yes all, of them); the Beethoven piano and violin sonatas, and any section at all of The Magic Flute. He had us try different methods of recall, one of which was what today we’d call visualization — in the case of the Kreutzer he suggested imagining a horse drawn carriage stuck in the mud with Beethoven inside railing at the driver as an image befitting the first movement. It’s stuck, all these years later, and unless I see that in my mind’s eye the performance fails for me. Perlman passes this test with flying colors, or muddy ones, if you want to extend the imagery.

The other stereo version I find truly compelling in its overall structure as this sense of urgency is Schneiderhan, one of his final records. This was after his Concerto with Jochum had established itself as the sine qua non, which for 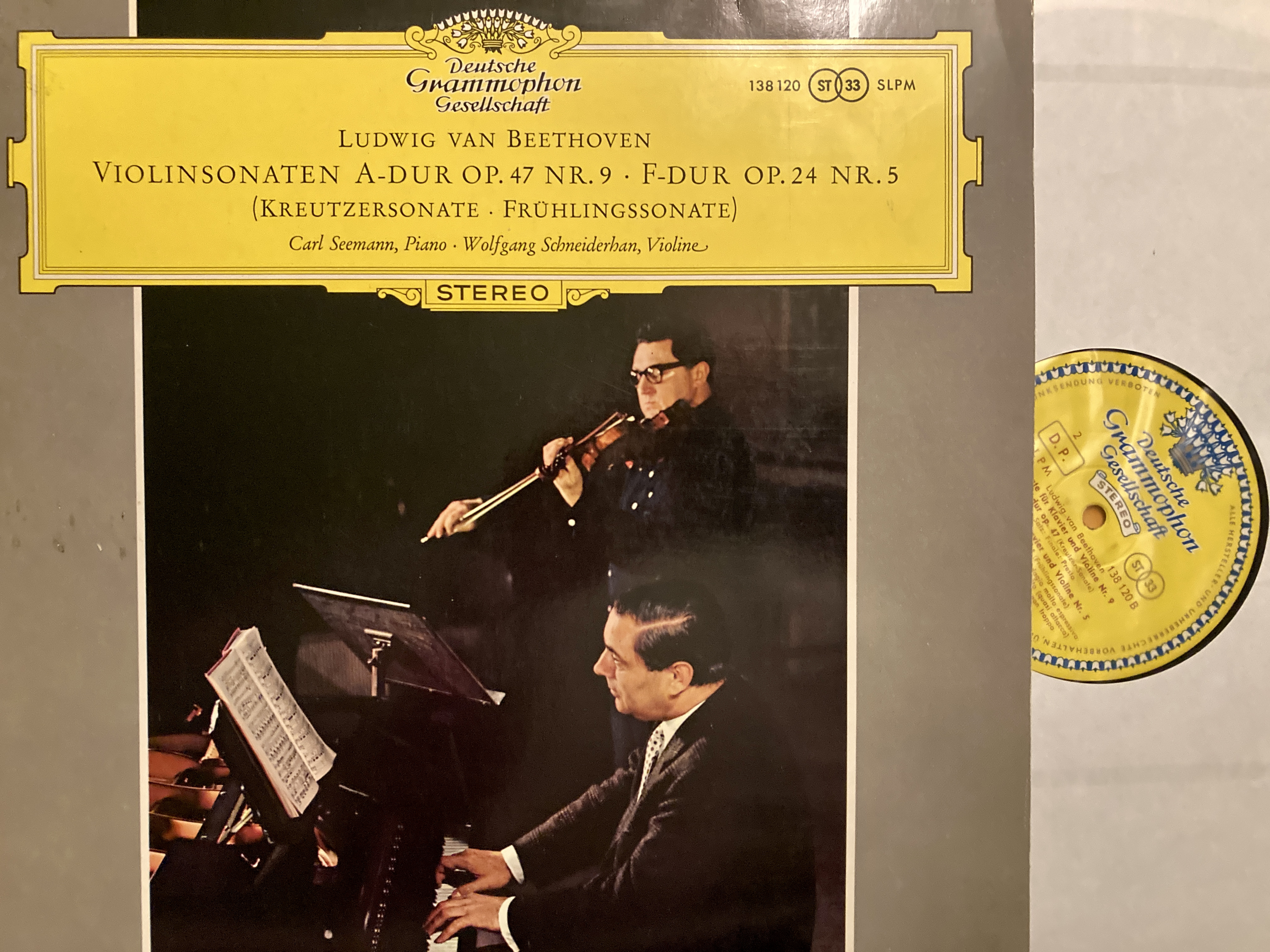 many of us it remains, and here he extends his mastery of Beethoven’s persona and style into the more intimate format. The one interpretative edge he has over Perlman, and it’s slight but it’s there, is that he is able to convey real reflection even in a single phrase or couple of bars, and the transition back to the main melody, in a way that eludes Perlman somewhat more, as well as Ashkenazy. It’s a pity we didn’t get a complete cycle from him we did in the early 1950s, when he partnered with Kempff, although the results there are comparably lackluster. Something must have transformed him as an artist after that Jochum concerto, and it extends into this Kreutzer. There are various European-only reissues, but the violin sound is far richer on the original Alle hersteller pressing.

One has to mention Szeryng or course, and indeed his Living Stereo record with Rubinstein is in this league for me, but still lacks the inspired phasing and drama that both Perlman and Schneiderhan (and their accompanists) have on 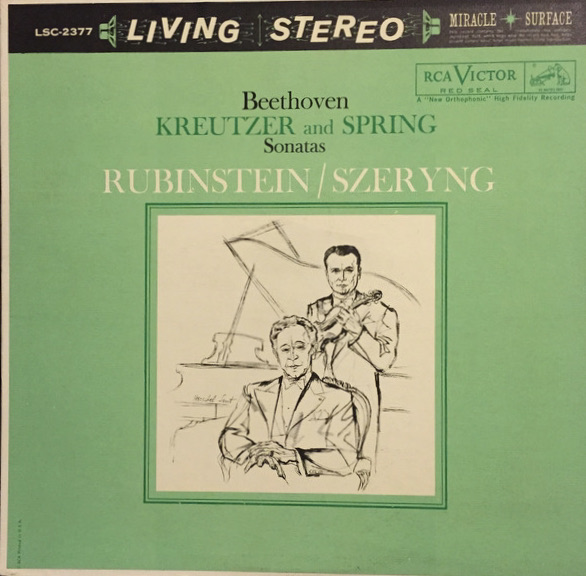 display from start to finish. His re-recording with Haebler from 1980 on Philips is decidedly less engaged, though apparently more valued by collectors. The 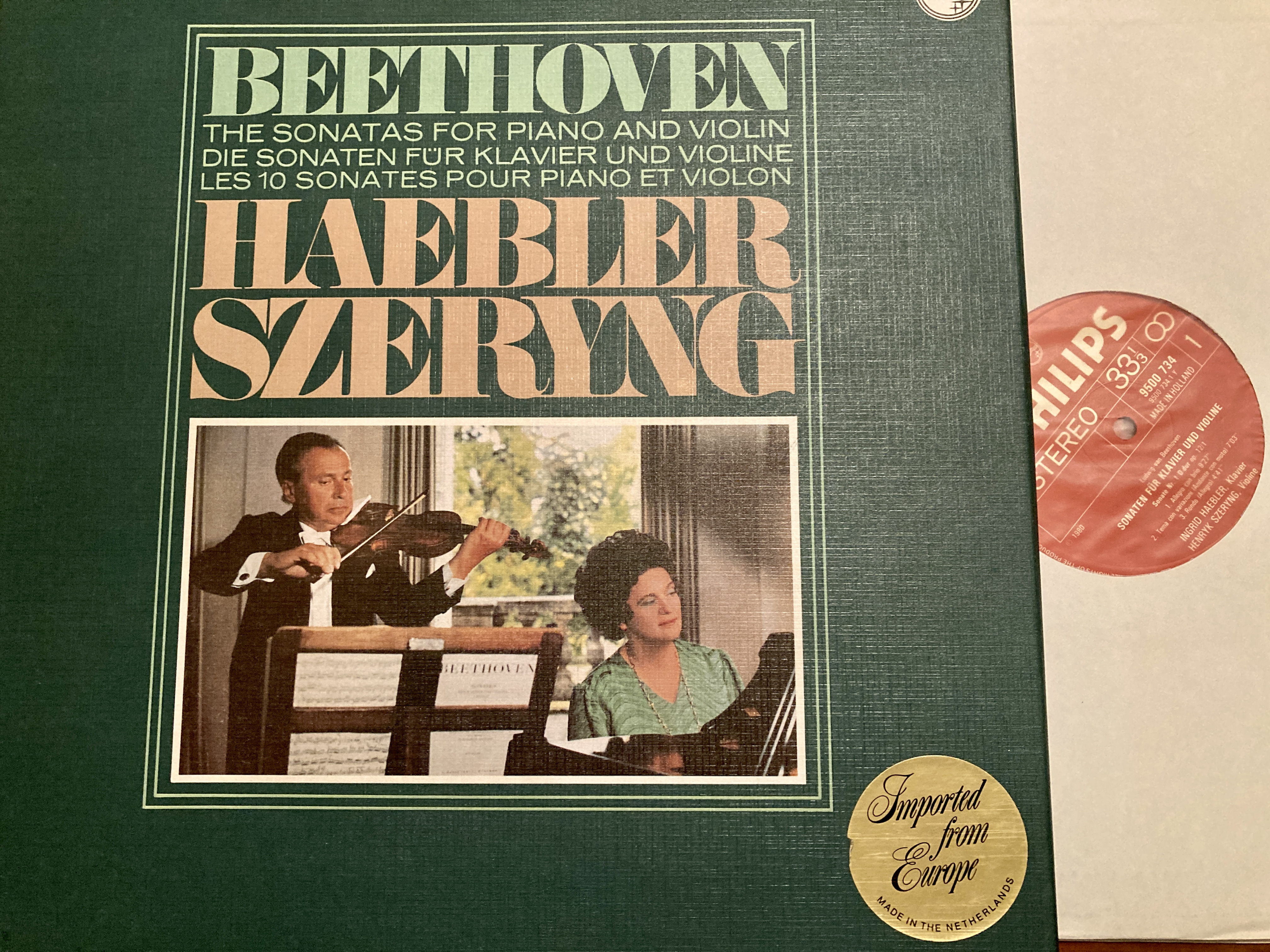 late analogue sound is superb, as is Haebler’s contribution. Oistrakh had also recorded the cycle with Philips (initially pressed by Mercury) in stereo, a performance which also fetches big bucks from collectors but has always struck me as being dull as dishwater, heresy though it may be to say such a thing. Phoning it in perhaps, if that metaphor works for recording. (The same could be said, in my humble estimation, of Kogan’s single attempt at the work, also Melodiya, issued in the US on MGM for some reason.) My evidence for the harshness of my judgement on the later Oistrakh is comparison to his earlier, scratchy old 1953 Melodiya recording — issued on 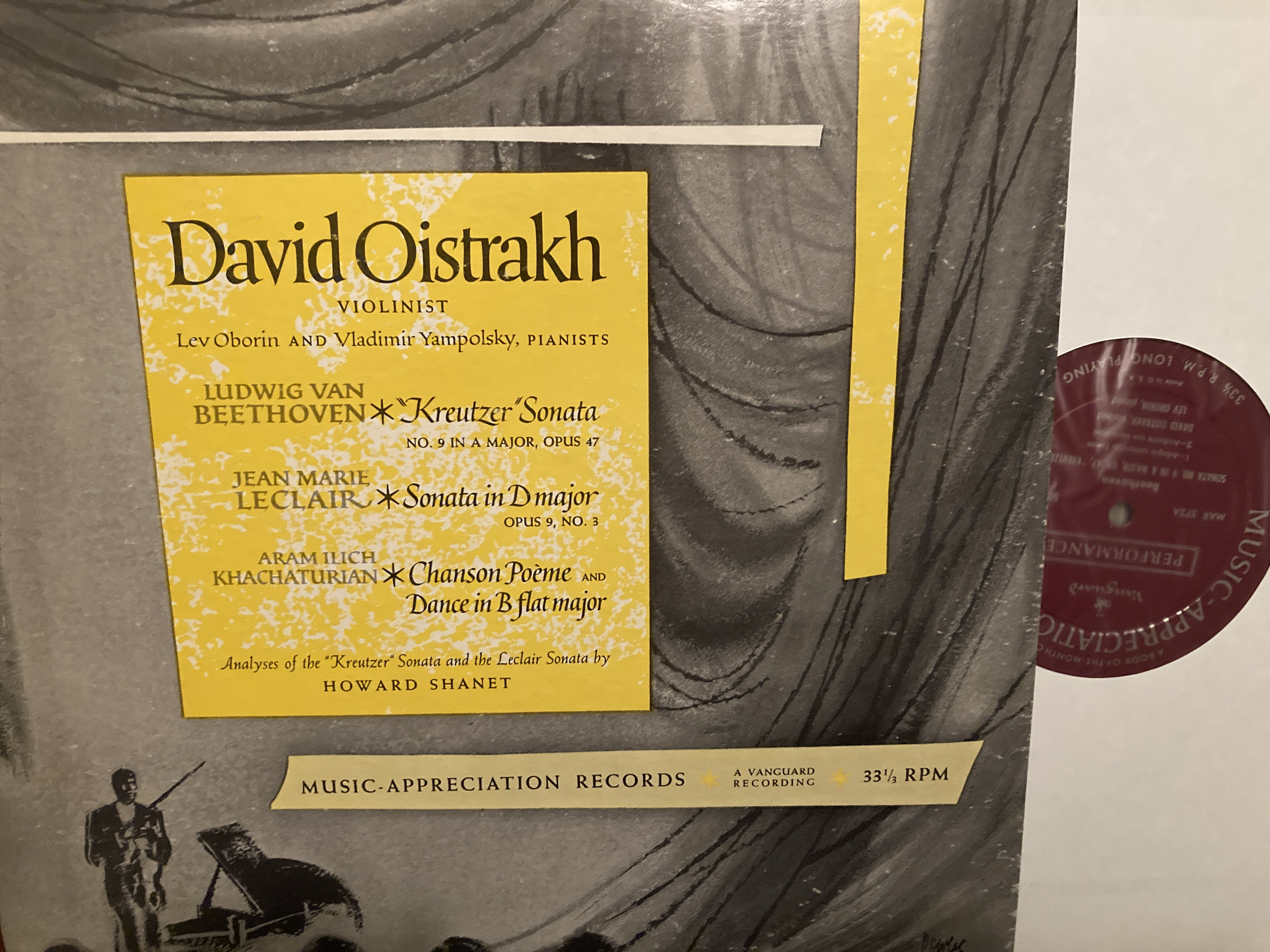 Vanguard in 1957 in a passable pressing, but if one can allow for the sonic limitations the reading itself is more in Perlman and Schneiderhan’s league, with its distinctly more robust and somewhat less refined style in general as was typical of the artist…except when it wasn’t, as was the case for whatever reason in the 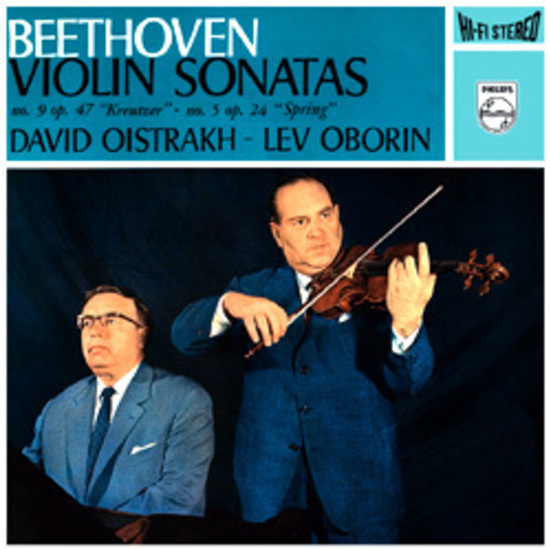 stereo cycle, where he and old Oborin just sound bored and playing the notes to get the cash. The Vanguard (“Music Appreciation Records”) record also includes Lecair’s Sonata in D, a short Baroque showpiece that Oistrakh must have like as he recorded it several times,

including a later version for RCA that is available in both stereo and mono; but again neither matches this early old Melodiya. It’s unusually slow for the artist and for the work; by comparison Grumiaux is no less inspired in this little gem which really has nothing at all in common with the

Kreutzer other than containing some of the most infectious, memorable tunes ever put down on paper. The Leclair is a sparkling little gem, while the Kreutzer is a monument, of course. A live recording with Frida Bauer, from the same period:

And the Grumiaux, a truly delectable confection:

A last Kreutzerpick for me is an interesting way to feed off of this comparison, in that the playing of the soloists — Francescatti and Casadesus — is decidedly more Italianate or Gallic (if one wants to be geographical about such 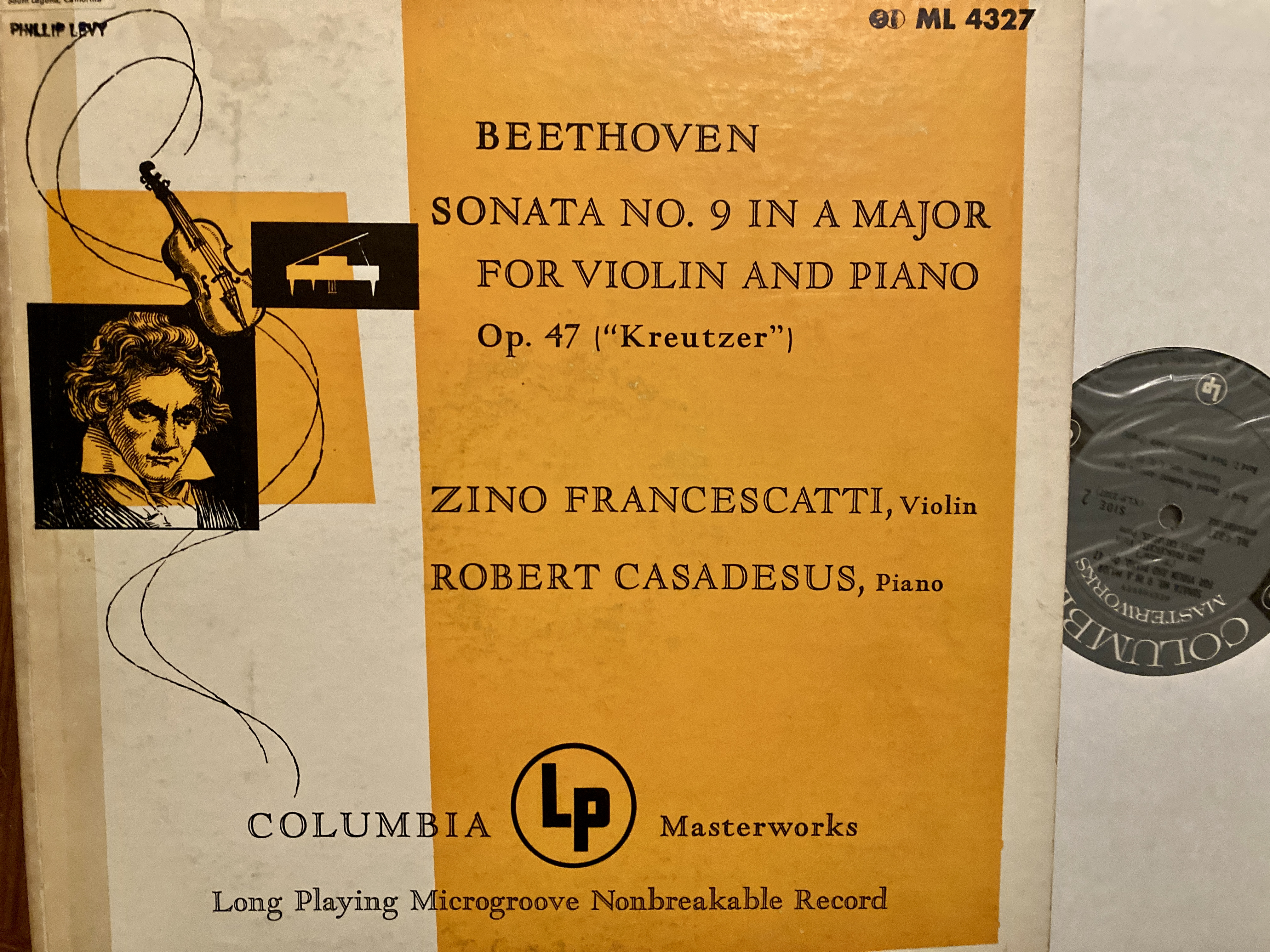 things). Francescatti’s thinner and more delicate style isn’t necessarily the most natural fit for the piece, especially consider what it means for me and the interpreters I otherwise favor, but he digs deep here and does produce more drama than is customary for him — this is certainly that same person who is a master of Mendelssohn’s concerto, or Casadesus in Ravel, for example — but together they must have set their sights on achieving something very different than their norm, and they did. It took me a while to find a truly clean playing copy, but the mono sound is rich and full, and does the work ample justice. A 1970 live broadcast here, shows the two artists kept the same spirit and personal view of the work over the decades. If anything, time aged its intensity even more for both men than they set down on disc in their youth: