Probably the least performed and well-known of Beethoven’s symphonies, the 4th: What to do with this odd bridge

between the towering heights of the Eroica and the 5th, as if dual shadows are cast on its place in the sequence? For that reason I’ve always liked the original album art from Karajan’s 1970s cycle, which shows a backlit number 4 illuminated by nighttime stars. I have three of Karajan’s four recordings of the 4th in my collection, all except the 1950s Philharmonia version. Beginning with the famous 1964 record Karajan treats the work with a breadth of phrase that evokes the 3rd but self-consciously points toward the rhythmic obsession of the 5th. (My copy of 138-803 is a first issue hersteller label, and lives up to the reputation for its sound.) This kind of linear, historicized view of Beethoven’s

symphonic development was a part of Karajan’s broader musical view and is hard to miss; the 1977 album art on 2531-104 adds the visual component as well as could be rendered. This second Berlin record is, to employ an overused term, more “streamlined” in its sound and approach; timings are marginally faster in 1964 but somehow “feel” faster because of the overall approach. A fellow Karajan enthusiast once described the 1977 cycle as having a “Hollywood” feel to it, and I don’t disagree: And why not? This is big, bold music, and Berlin at its apogee under the Maestro could pack a punch like no other band ever has. But in the 4th, along with the 1st and 2nd, don’t

really benefit from the soundstage approach. Likewise, Karajan’s final 1983 record (415-121) involves an almost identical interpretation — tempi are stunningly identical — and is sonically interesting mostly because on vinyl the early digital is not at all as horrible as the first iterations of these performances on CD; I read recently that new mastering has cleaned up the sound so that the current issue of this final Karajan/Unitel cycle more approximates what it sounds like on vinyl. Of the three Karajans here, the 1964 version is the winner, for sound as well as performance. Vinyl never sounded better than in these Beethoven records. Though I hasten to add that the capstone, the 9th, was indeed exceeded in the 1977 cycle. And 7 and 8 were quite particularly outstanding in HvK’s last recording. As a postscript, Karajan pupil Christian Thieleman has a rendition with the Vienna Phil. that could be interestingly described as a hybrid of his mentor and Jochum (more below). At times listening to Thielemann one could sample in the 1983 Karajan record and not hear the difference, except for odd moments when he slows the tempi too noticeably.

My two non-Karajan comparisons of the 4th involve yet another Berlin DGG record, Jochum’s 1961 (138-964). Karajan hadn’t completely put his imprint onto the band yet, and there is still something Furwangler-ish lingering in the rubatos here, though only at the margins. Overall the interpretation is most intriguing for the great Brucknerian’s sense of 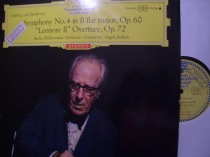 melodic line, the more varied tempi do not sound affected at all. In this approach he corresponds to Karajan but is more intimate and particular. The orchestra can’t have been any different in size and composition than it was for Karajan three years later, but it positively sounds smaller. Jochum had that gift, though, an uncanny ability to make massive sound feel intimate. On CD it’s apparently only currently available as a larger box set with his mono Brahms cycle (superb) and the landmark Bruckner.

The last-but-certainly-not-least mention is Mravinsky, a conductor I hardly knew anything of beyond my dad’s box set of the Tchaikovsky 4/5/6 until RCA was able to get some of his Melodiya recordings marketed on a more mainstream scale. I recently 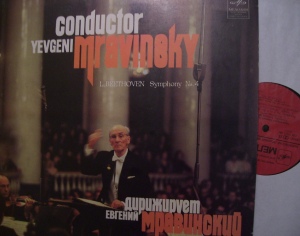 picked up his 1973 Beethoven 4th, with Leningrad of course, which is the version included on CD on the Mravinsky edition along with a stellar Tchaikovsky 5th from the same period. The original Melodiya LP (18171), issued in 1983, is of surprising quality — the Soviets weren’t known for their vinyl — and the performance is a sine qua non. Tempi are fast and furious, probably not to the liking of all, but give the piece a totally different feel, more of the Angry Young Man anticipating the 5th here than contemplative artistic development as Karajan would suggest. Phrases are shaped in a way 180 degrees apart from either Karajan or Jochum, in a completely stereotype-defying manner at that: There is warth and passion here, not cold Soviet realism. By the time we get to the finale things are nearly out of control, running away with themselves — a different kind of foreshadowing struck me in Schiller’s verse “Laufet Brüder” from the 9th.  Listen here.

Jonathan Riehl writes and teaches communications, rhetoric, and American politics. He used to be a Republican. END_OF_DOCUMENT_TOKEN_TO_BE_REPLACED
This entry was posted on Monday, July 20th, 2015 at 1:53 am and tagged with Beethoven, Jochum, Karajan, Mravinsky and posted in Music Criticism. You can follow any responses to this entry through the RSS 2.0 feed.
« Elgar In the South
Masques et Bergamasques: A Brief Comparison »

One response to “Beethoven’s 4th”