Edvard Grieg is best known for his Piano Concerto and Peer Gynt Suites, but also composed a number of other orchestral suites that are wonderful examples of late Romantic coloratura, every bit as rich as Ravel and Debussy. The Norwegian Dances, Symphonic Dances, and Lyric Suite are among these rarely recorded and even more rarely recorded works. Here are some of the standouts. 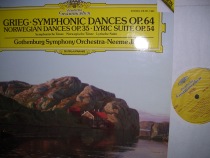 Järvi has done a fine job in covering almost everything Grieg produced, and his record of the three works above, with the Gothenburg (Sweden) Symphony, is hard to match. One can find it on DGG vinyl, 1986 pressing (419-431), and the sound and performances are something to relish. These are tunes that stick in your head, folk melodies, full of drama and tuneful sympathy. The Gothenburg acoustics are first rate, more impressive on LP than on CD, but not worth missing if you don’t own a turntable.

For reasons unknown to me, the Philharmonia has a tradition of performing and recording these works as well. In 1970 with Morton Gould, Copland disciple, (Symphonic Dances and Norwegian Dances, RCA 3158), and then

again with Raymond Leppard — better known for his Bach conducting — on Philips digital 6514-203. 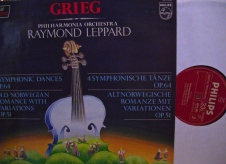 But Leppard whips up emotion on par with anything a Copland Rodeo could configure. The tone is less aggressive, more Anglican in the sense of Elgarian undertones versus gnomes waiting under the bridge. The sonics on both records is superb, exemplifying pinnacle analogue as well as digital soundscapes. It’s an interesting exercise to hear the same orchestra mete out these songs in different recording mediums, with directors who came to the podium with particular perspectives.

Lastly Sir John Barbirolli, whose Elgarian credentials go without saying, delivers something that is in another category. Glorious John recorded these Grieg work several times, but I’m going off the Mercury record here (90164), the Symphonic 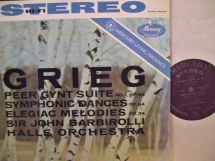 Dances and Elegiac Melodies. More than the later interpreters, these recordings produce sound that is both massive and intimate, as with his other records of contemporaries such as Mahler. The modern artists bring spectacle; Barbirolli brings familiarity. As he does with Elgar, these great melodies become family. You can find it on CD in this ‘90s reissue I recall from working at Tower Records as a high schooler, when I first discovered JB.