I’ve always enjoyed Spanish classical music, ever since I was indoctrinated as a child to the bustling excitement of de Falla’s Three Cornered Hat, which remains a favorite still today. Among the pieces I came to know later was Isaac Albéniz’s masterpiece Iberia, a piano suite written in the first decade of the 20th Century. As with much of this underrated composer’s works, it is known mostly in transcription form; probably his most popular works are commonly performed on guitar, though first written for the piano (“Asturias,” originally titled “Leyenda” for piano, as the prime example).

Iberia is a suite of 12 short pieces, each evocative of Spanish folk themes or regions. I favor the piano version(s) recorded by 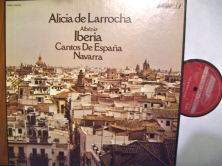 the great Alicia de Larrocha, who did so much to popularize Spanish piano works over the years. She recorded the full suite three times, 1962 (EMI/Hispavox), 1973 and 1986 (both London/Decca). I favor the 1973, which won the Grand Prix du Disque that year. It is a rich and lilting performance free of affect that too often infects folk music-inspired works. The CD transfer is eminently acceptable.

The orchestrations of Iberia are a hodgepodge, but nevermind. Two of Albéniz’s next-generation colleagues, E.F. Arbós and Carlos Surinach, provide a combined orchestration (Arbós also created a shorted Suite of five movements). A much more contemporary orchestration was completed by the Slovak musician Peter Breiner in the 1990s. I’m not familiar with it, though guess it would sound foreign after coming to know the Arbós/Surinach version.

As a piece of orchestral music Iberia is opulent and spectacular, in keeping with the moods of Ravel, de Falla, and other romantic impressionists of the time. There are only a handful of recordings of the full orchestration — single movements from the suite do crop up more often on Spanish-themed collections.

The first full recording on LP was Ormandy’s 1956 set with Philadelphia (M2L-237). Hardly hampered by mono sound, it is spread out generously over four sides with no filler, and on my pristine 6-eye copy is as sonically rewarding as any of the later stereo competitors, if not more so. Compared to the RCA Living Stereo favorites Jean Morel and Fritz Reiner, Ormandy is to my ears even more rhythmically interesting and compelling, eschewing the olé!-let’s-dance-a-flamenco stereotypes that are hard to avoid in music like this. The mono sound is opulent and, though I’ve not heard it myself, is now finally available on CD in a masters transfer from Pristine Classical label and engineer Mark Obert-Thon. The vinyl was never reissued on LP after its original release in 1956.

The lush drama of the piece easily lent itself to the early Living Stereo showpiece selections, and Jean Morel’s 1961 version 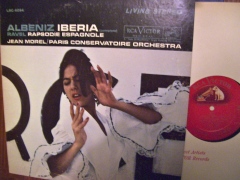 with the Paris Conservatoire is among the most sought after of the series (LSC 6094; my copy used for this analysis, loaned by a friend, is 1S-1S-3S-3S). While the sound is crisp and light, I find it to be reedy, lacking in depth and bass, as is the case for me with so many of these highly touted LSCs. Unlike Ormandy, the Morel set is squeezed onto three sides, with Ravel’s Rapsodie Espagnole on side four, and the sonic depth suffers. Ironically, though Albéniz lived and composed in Paris, and was hugely popular there, Morel’s French élan doesn’t quite suit the work, which has too much romantic brooding and drama in it for this snappy, showy interpretation. In its mono issue, the Morel is even more thin and one-dimensional. Morel’s Living Stereo version is currently unavailable on CD, though his later London/Decca remake is, on the Eloquence label in the European market. I’ve not heard that later version on LP.

A few years earlier, in 1958, Fritz Reiner had recorded three of the more popular Iberia selections with Chicago for the travelogue Living Stereo album “Spain.” While my admittedly ruddy 5S-1S has some ticks and pops, the sound is to my ears more acoustically pleasing than Morel. Perhaps it had to do with recording venues? But Reiner too lacks the depth of the

Philadelphia version, or for that matter of later digital incarnations including Enrique Bátiz’s shortened Arbós Suite with the opulent London Symphony on EMI (1981, DS-37878), or Jesus López-Cobos’ complete 1998 Cincinnati version on Telarc. If Bátiz is a

bit wayward in his pacing, the early digital sound is extremely dynamic and belies many of the critiques of this period. It is out of print on CD but still available — I can only speak to the sonics on the vinyl pressing. López-Cobos benefits from theatrical Telarc Direct Stream Digital engineering, and if anything overdoes the symphonic fireworks. On CD, however, there is no better way to experience the theatrics of this relatively unknown Spanish masterpiece.

Jonathan Riehl writes and teaches communications, rhetoric, and American politics. He used to be a Republican. END_OF_DOCUMENT_TOKEN_TO_BE_REPLACED
This entry was posted on Wednesday, December 19th, 2012 at 3:35 am and tagged with Albéniz, Falla, Iberia, Living Stereo, Morel, Ormandy, Spanish music, Telarc and posted in Music Criticism. You can follow any responses to this entry through the RSS 2.0 feed.
« Messiah
Brahms’ Violin Concerto »

One response to “Albéniz’s Iberia”