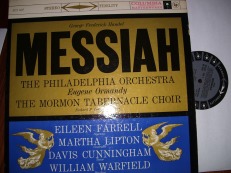 There are so many versions of The Messiah the it rather rejects criticism, but there is still one that rises above all: Ormandy’s classic 1959 Philadelphia performance with the Mormon Tabernacle. The sound, on my first pressing 6-eyes is astounding, besting anything I’ve heard on later digital work, CD or vinyl. The richness and depth of sound is unsurpassed.

That said, I was wedded to this recording until I discovered Raymond Leppard’s 1975 English Chamber Orchestra recording with Erato (my pressing is a special club issue, in an EMI German licensed pressing). The Leppard performance is straightforward and passionate, if not as vivid as the Philadelphians. It was also recorded in quadraphonic sound, providing a surround-sound experience that reproduces in wonderful form. In performance, it comes out a bit dainty compared to Ormandy’s opulence, which is how some of us liek to hear this work performed. Still, spread out over three discs as opposed to the usual two, Leppard gives us a spaciousness to the sound that lacks in many other contemporary recordings. None of which is reproduced on compact disc. 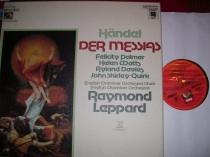 All of this said, Ormandy takes the day. Whether in the Hallelujah chorus or otherwise, the sheer enthusiasm of the band is infectious. One can have a direct, authentic performance as with Leppard, but Ormandy finds something more, bigger and louder and more magnificent. Even if it was recorded in 1959.

Jonathan Riehl writes and teaches communications, rhetoric, and American politics. He used to be a Republican. END_OF_DOCUMENT_TOKEN_TO_BE_REPLACED
This entry was posted on Saturday, December 8th, 2012 at 3:27 am and tagged with Handel, Leppard, Messiah, Ormandy and posted in Music Criticism. You can follow any responses to this entry through the RSS 2.0 feed.
« Honegger’s 2nd and 3rd
Albéniz’s Iberia »