I recently discovered a thrift shop gem, a first generation 1949 Columbia LP of Ormandy leading the Philadelphians in Prokofiev’s Alexander Nevsky. I almost didn’t buy it because these early mono LPs are often beat up beyond reclamation 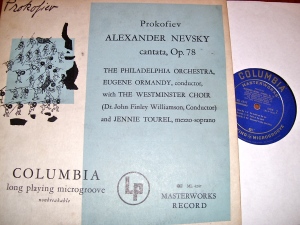 and sound awful — and they don’t sell among collectors. But the vinyl here looked exceptionally good, and I saw it was a blue label, clearly copyright dated 1949, the first year of the LP.

What I did not know was who the artist was who had sketched the small battle scene present on the front cover. The sketch is not signed and there is no notation on the back cover. I listed the LP on eBay for $4, after cleaning it and hearing some minor surface noise. One of my friends/colleagues in the world of eBay 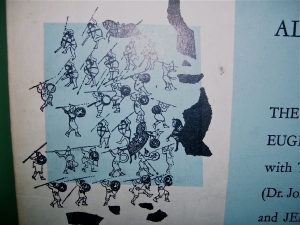 Classical music emailed me a few days later. “You know that’s a Warhol cover, right? It’s worth some money!”

I told Gus I had no idea. It doesn’t look like the Warhol I know, but sure enough, this was Andy Warhol’s second published piece of artwork. From what my research shows, his first paying gig was indeed with Columbia records, where he produced three small pieces of album art before moving to RCA Records, where he did much more. This French website lists the album covers in sequence; the Nevsky displayed is a second pressing with a pink cover, rather than the original blue which my copy reflects. Wikipedia has it wrong, stating that his first gig was with RCA. The three 1949 Columbia covers, including Nevsky, pre-date them.

The 1949 Nevsky is bright and airy, more rhythmic than Ormandy’s shock-and-awe 1975 remake. Unfortunately, it appears that the recording has never been issued on CD.This version is probably my favorite, though the more contemporary Järvi

SNO is also stunning in its impact and richness. Still, Philadelphia’s sound from the mid-’70s was something special, and suited to the drama of a film score with battles on ice and choral odes to Mother Russia.

I have the 1975 Ormandy in two interesting incarnations, a stereo LP and a quadraphonic 8-track. I believe the LP was also issued in CD-4 quadraphonic, but this is equipment I don’t have. The difference between the LP and the quad 8-track are very interesting musically, and illustrate

what quad sound was (or was trying to be) in clear form. The LP is brilliantly recorded, rich, direct, with a huge dynamic range that does every credit to Prokofiev’s dramatic, dynamic score. The quadraphonic sound — even on my new-old-stock tape which was opened by and has only been played a handful of times, by me — is less precise and more rounded. But the separation of orchestral sections among the four speakers, especially the choral segments, is astounding. The LP puts you in a front row seat. The quadraphonic version puts you in the center of the orchestra.

Järvi is often criticized for fast tempos and lack of dramatic/emotional weight. One can see some of that on dispilay in his 1987 Nevsky, as passages seem pumped along — no lack of energy, to be sure — but a sense at moments of just trying to get to the next movement. The Chandos sound is amazing, with its typical reverberation and sense of depth. But it lacks the

richness of the Philadelphia LP. But we are deep into apples and oranges here; Chandos digital produces a completely different effect from either the stereo or quadraphonic Ormandy on RCA in 1975. Recorded performance always exists in two dimensions, the interpretation itself and then the technology that allows us to re-hear it.

One final note on the choral contributions. The 1949 Ormandy uses a rather trite English translation (popular at the time); the 1975 is in the original Russian, with a local Philadelphia choir. Järvi has another non-native choir, from Scotland. But for whatever reason, he gets his voices to bellow with noticeably more fervor. It makes a big difference in the big choral passages. Ormandy, one might say, was treating this as a Cantata, which technically it is — Järvi was playing it as the film score, which it also is.

Who knew if Andy Warhol even listened to the piece, or saw the film? I might guess he did.