I have long been fascinated by Schubert’s 8th, and today listened through the entire LP of Karajan’s mono recording with the Philharmonia which I recently acquired. But my gold standard is the

Sinopoli, with the same orchestra, recorded decades later, in the digital era.

Sinopoli, an M.D. by training, is one of my favorite conductors, and it is tragic we lost him so early in life. His writings on music are deeply insightful and in this case, he perceived in the Unfinished a conception of “Dream and Memory” which parallels the experiences my family has had in coping with my mother’s Alzheimer’s disease. Were Sinopoli alive, I would certainly be writing him a letter after re-reading his notes on this piece. In my peripatetic record hunting, I managed to come across an autographed copy of his essay on the Unfinished, which I am including at the end of this post…he writes:

“The music of the b minor Symphony reflects the stages that occur between the ‘apparition’ of the ‘beloved good’ as dream or memory and the howl of ‘blinding’, of loss.”

This is the essence of Alzheimer’s, as it robs a person of memory, and yet, somehow clarifies the nature of humanity, as Sinopoli interperts the Symphony: “There are wandering melodies in which the desire to sing is stronger than any idea of will or structural development. This breeds an ineffable sadness, and the divine; the celestial thing about Schubert’s music is its freedom from temporality.”

Alzheimers knows no temporality, as any caregiver could tell you. Alzheimers lives in the ineffable present, in the dream that was memory. Sinopoli’s Philharmonia recording captures this in a positively haunting way. It is unparalleled.

So back to Karajan, with the same orchestra, decades earlier. Perhaps he prepared them for what was to come.

It’s a UK sitting angel pressing, which was surprisingly free of surface noise. As with many other Philharmonia recordings of this period, made possible by Walter Legge’s one-microphone wizardry, the sound is eery and echoes with a resonance that befits the character of the piece.

I am reminded of HvK’s Britten Variations on a Theme of Frank Bridge, one of my absolute favorite recordings of all time, where the same thing is at work: Legge’s masterful sonics pairing with the dramatic and haunting score. I have a first pressing on HMV, but the CD transfer does it full justice. With the Schubert, HvK’s first movement was intense and sublime at moments, foreshadowing his later BPO recording, and also his Bruckner. The second movement was disappointing, too light and jumpy, not fitting with the tenor of the work.

It should capture more of the dream and memory, as Sinopoli writes.

“The whole work is poised on the edge of nothingness,” he writes. So too is my beloved mother. She taught me to appreciate classical music, and so in a way all things come full circle….but are yet “Unfinished.” 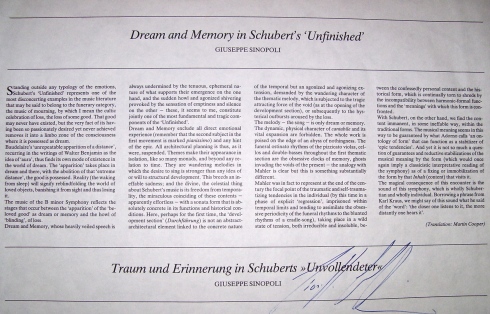 Jonathan Riehl writes and teaches communications, rhetoric, and American politics. He used to be a Republican. END_OF_DOCUMENT_TOKEN_TO_BE_REPLACED
This entry was posted on Thursday, February 3rd, 2011 at 6:22 pm and tagged with Alzheimer's, Bruckner, Karajan, Sinopoli, Walter Legge and posted in Music Criticism. You can follow any responses to this entry through the RSS 2.0 feed.
« Furtwängler and Bruckner’s 9th
A New Favorite: The 1957 Karajan Haydn Variations »